One very interesting gundam is well, not a gundam. The Sinanju Stein is really weird since it was developped by Anaheim from the Nu Gundam and the Sazabi. And then the Stein was made into both the Unicorn and the Banshee by removing parts and the by adding parts it was made into the Sinanju. So basically it is the center point that connects Char’s Counterattack to Gundam UC. So i really think its interesting. 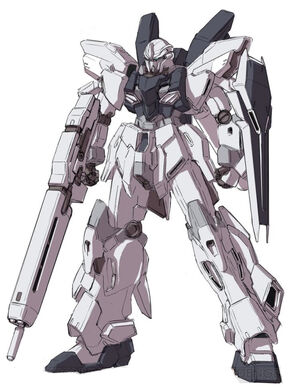 Another interesting thing from Gundam is the psycoframe tech. It is featured in:
MSN-04 Sazabi
MSN-04II Nightingale
RX-93 ν Gundam
RX-93-ν2 Hi-ν Gundam
NZ-333 α Azieru
MSN-06S Sinanju Stein
MSN-06S Sinanju
NZ-666 Kshatriya
RX-0 Unicorn Gundam/RX-0 Full Armor Unicorn Gundam
RX-0 Unicorn Gundam 02 Banshee/RX-0(N) Unicorn Gundam 02 Banshee Norn
AMA-X7 Shamblo
YAMS-132 Rozen Zulu
And also notice how the Sazabi and Nightingale are the same thing except they are featured in different productions. One is in Char Counterattack and the other is in Beltorchika’s Children. Char’s and Beltorchika’s are different tellings of the same events during that time period. The same goes with Amuro’s Nu and Hi-NU. And the Jagd Doga was replaced with the Psyco Geara Doga. And Beltorchika was pregnant with Amuro’s child. Plus it confirms Char and Amuro’s KIA.

And a funny thing about the Unicorn and Banshee. The NT-D system is meant to create Newtype defenseless against it. So it goes into Destroy mode to do that. It works based on the pilot’s WILL. But its funny since the Unicorn and Banshee also utilize the Psycoframe tech. Psycoframes are dependant on NEWTYPE pilots since it works on the newtype’s emotions. So basically the Unicorn and Banshee works best and only with a Newtype pilot with a strong will and deep emotion (Banagher Links, Marida Cruz, and Riddhe Marcenas)

Gundam Belphagor is pretty interesting. Sort of a Unicorn NT-D long before Unicorn.

Oh gosh, I’ve been in love with this suit and its resilence lately.

Yeah Divider X is the best looking Gundam in the whole X series. Earlier X gundam and later XX gundam just not so good. Plus the beam cannon shield. I mean come on its like the best personification of “the best attack is defense”. It simply does both.

Yeah Divider X is the best looking Gundam in the whole X series. Earlier X gundam and later XX gundam just not so good. Plus the beam cannon shield. I mean come on its like the best personification of “the best attack is defense”. It simply does both.

Not only it is the best looking Gundam in the After War, but IMHO, it is the most effective mobile suit in After War. The Harmonica is one of the most creative equipments I have ever seen in the whole meta-verse. It’s so versatile. Not only that it can be used for offense and defense, but it can be used for additional mobility and speed.

Personally I prefer the origional X in terms of design though the X divider is right behind it in terms of my favorite suit of the AW.

@Alphachurch: I wouldn’t say the Nighingale and the Sazabi are the same, they filled the same plot role, but spec wise, and loadout wise, they’re diffrent beasts, they’re releated but not the same suit really. Same goes for the Hi-Nu and Nu but the Sazabi and the Nightengale have even less in common.

Anyhow as for Intresting mobile suits, the whole Formula Series, F90-F97 (Crossbone) are pretty intresting this is includeing the Silihoute Formula Gundams as well, allot of intresting features in the lot of them. Not to mention there was an AI controlled F90 that used Char’s Combat data which was awesome.

I got a soft spot for the Infinite Justice. It looks hokey with beam blades all over, a pink-ish color scheme, and a really large backpack with even more beam blades, but it’s done in a rather practical manner compared to something like the Seravee with its many beam saber arms that look to be overcompensating. I keep wishing for a scene where it cuts its away inside a big ship or space station, then proceeds to be a high-speed beam buzz saw through the whole thing, cutting it up into pieces from the inside.

Runner-up is the Sumo from Turn A. I keep thinking it’s the pinnacle of the Zaku’s curvy/round design. The minimalist equipment that still allows the suit to be deadly and effective is a nice touch too.

SEED: before i actually watched it, I thought it was like take a gundam, call it a name. Take that gundam and add a backpack, call it another name. Strike, Aile Strike, Launcher Strike, Sword Strike, Freedom Strike (now i know that this is a different gundam)

And u guys like X, and Infinite Justice. i concur with those but these are my top 3

00 Raiser (cuz im a 00 fanboy)- basically for its specs and style. Mad fast and it takes legit pilot skill to drive this. And you do need the comings of an Innovator to excell in it. And i love its simple design. It’s thin and fragile but not weak at all. And TRANS-AM RAISER is adrenaline pumping (u must admit). It comes in different modes (00 Gundam + 0 Raiser, XN Raiser, GN Condenser, GN Sword III)

Astray Red Frame- this thing is a beauty. it has real style with the red frame and white and black accents. The body is sleek and aerodynamic. Now this thing is more static since it has few variation. It comes with a KATANA which is the best part. And honestly I think this is the best looking gundam, so good that its better than a gundam. In battle u know it cant lose since it comes equipped with a standard rifle and 1 katana and beam sabers which makes up a normal gundam, except that this is faster moving on land than others. I honestly would repaint most of the white to Jet Black to create a more intimidating persona. And then there is Kai, as if 1 katana wasnt enough for the gundam world and the Tactical ARMS is a beast in its own sense since it is able to do ranged and melee attacks wonderfully or it can look cool as it boosts the gundam into battle.

AGE-2 I am a minimalist and i like it simple and strong. that is what AGE-2 is. Simple, the design of this gundam is super simple my sister can even draw it. And it doesnt look bad at all. It looks like an upgraded Raiser minus everything from 00. So why do I like it. It was a beast. The DODS rifle that comes with the AGE-2 was strong but it didnt boast itself like TRANS-AM did. It was simple. It was easy enough for kid so it has to be simple. And the simplicity is sleek as well and its quick changeable plane mode increases speed by 3x. This gundam is ready for any battle since it never has to worry about being too slow or something. And then you have all the extra modes for extra battle power.

Out of the AGE suits I do like the AGE-2 Artimes. It just looks so cool with two shoulder mounted cannons. And the colour scheme is nice.

One rather interesting, yet amazing Gundam is the Strike Noir. While It’s a version of the original strike, it adds in several new features and is so much more badass than the strike could have ever hoped to be.

Oooh, the Strike Noir is an interesting one indeed. It’s kind of a shame it made its debut in an OVA that wasn’t filled with Gundam acrobatics. I though it didn’t really show off the unique design as well as it could have.

Regarding AGE suits, I love the AGE-1 and AGE-3, along with the Adele and G-Exes for grunt suits. No frills, just the basics, but still able to kick some ass.

I have to agree Adele and G-exes do look very nice for the grunt suits. And I was quite impressed by Gundam Legilis.

If we’re talking intresting in the Cosmic Era, Stargazer takes the cake for me, it’s a scientific insturment for exploration, showing that mobile suits can be used for more than war. A concept that I don’t think will take on the large scale, because I don’t think Gundam without war would take with the fans.

you cant have a gundam star trek. Essentially gundam is inside our solar system and the main theme is the folly of the war. You cant just throw away one of the main themes and unite it with something fundamentally alien to the series and hope for the best.

I didn’t say it would happen facepalm I even said it’d break away from the themes and would take off. (Read: “A concept that I don’t think will take on the large scale, because I don’t think Gundam without war would take with the fans.”)

And speaking of breaking main themes, please look at this newest series FFS. It’s based around model building, that breaks the formula more than G did.

Its going to be a couple of Ovas again isnt it? Anyway the Gunpla builder thing works because it is initially set in kinda the real world. Its more of a ad for the gunpla kits with a single unifying story than a true gundam series. I knew you did not mean it would happen. there is no need to go facepalm. I am just saying it wont happen and it cant happen because its never been about that. Even when we had aliens in 00 movie there was still the main theme of war and preventing it.